Battle on the emerging market of Active Content: Amazon Kindle versus Apple

Apple invited the press to their “Come see our latest creation” event in San Francisco on January 27th. And the computer and e-book industry starts trembling with fear: Companies like Microsoft and Amazon are getting really nervous, because Apple may conquer the emerging market of Active Content.

Apple did not announce that the company will be engaged in the e-book or tablet-market – but the rumors about an “iSlate” or “iPad” are quite persistent. Therefore Microsoft’s Steve Ballmer tried to steal Apple the show at his keynote at the CES in Las Vegas: He just renamed the tablet-PCs on stage as “slate-PCs” … but it’s not about a name. 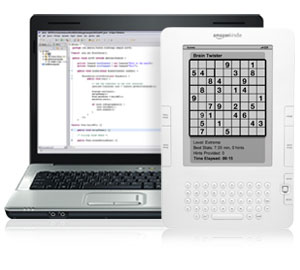 Now Amazon announced, that the company will open up their e-book platform for third party developers: Within some month, they’ll release a Kindle Development Kit (KDK) and will also provide the sales channel for the active content created with that software development kit (SDK).
The revenue sharing model looks quite familiar to iPhone developers: 70% to the developer and content provider, 30% for Amazon. But Amazon charges an additional $0.15 per MB for content delivery … as the Kindle is not sold with a mobile phone contract. Amazon has to pay the distribution costs to the mobile network operators if the content is delivered via the mobile data channel.

Amazon is probably in a better starting position in the battle for market shares in the emerging market of Active Content: They have a lot of experience with content distribution with the Kindle and they are in direct contact with the publishers … but Apple has the ability to rouse the e-book-market from slumber by innovation. They may transfer the pathetic e-books into a new and emerging market: Active Content.

There are a lot of advantages for Apple to tip the scales:

Amazon’s move to open up the Kindle to 3rd party developers and create a platform for Active Content is absolutely right … but can it compete with Apples offering? On January 27th 2010 we’ll know much, much more.